Given that the first official royal yacht was the HMY Mary (HMY stands for His or Her Majesty’s Yacht), gifted to Charles II by the Dutch in 1660, we can say that the royal family has a long history of seafaring. To be more precise, there have been as many as 83 royal yachts so far, including HYM Britannia, the most recent one.

Even though it was decommissioned in 1997, the Britannia is still a significant artifact and a place for some major events to be held. Here is a brief history of some of the most important moments during its service which lasted for 44 years, as well as some interesting facts not many people know about it. 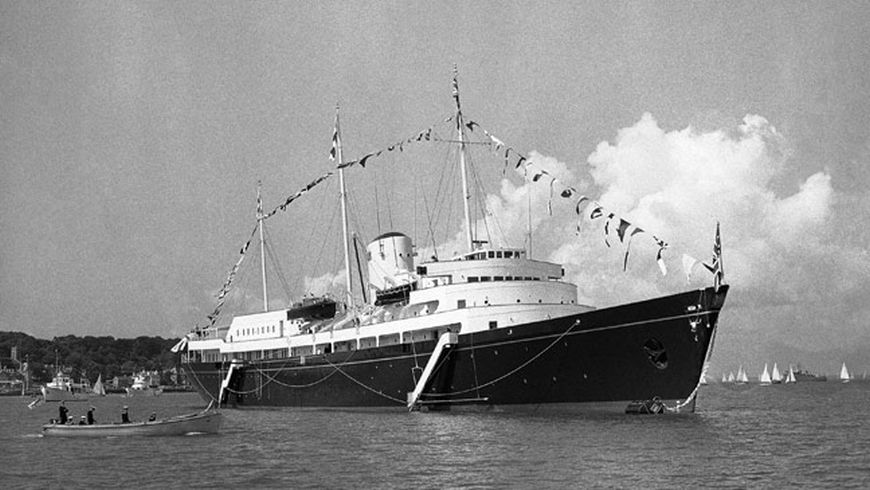 Built by John Brown & Co at the shipyard in Clyde bank, Scotland alongside well-known liners Queen Elizabeth and Queen Mary, the Britannia was constructed to travel at a maximum 22.5 knots, which made it ideal for ocean-going diplomacy. It has been estimated to have traveled around 1.1 million miles over the course of its 44-year service. Before that, the royal family would use ships from the Royal Navy.

When the designs for the Britannia were submitted, King George VI was already of poor health, which is exactly why they thought ocean travel might help him at least alleviate some symptoms. Unfortunately, just two days after it had been commissioned, the King passed away on February 6, 1952, so he didn’t live to see it launch.

It was only the next year that the ship was completed, more precisely, in April 1953. In the meantime, they kept its name a secret. Once the day of its official launch finally came, Queen Elizabeth announced, opening a bottle of wine, that it will be named the Britannia. Her actual words were: “I name this ship Britannia… I wish success to her and all who sail in her.”

The ship was created to double as a hospital 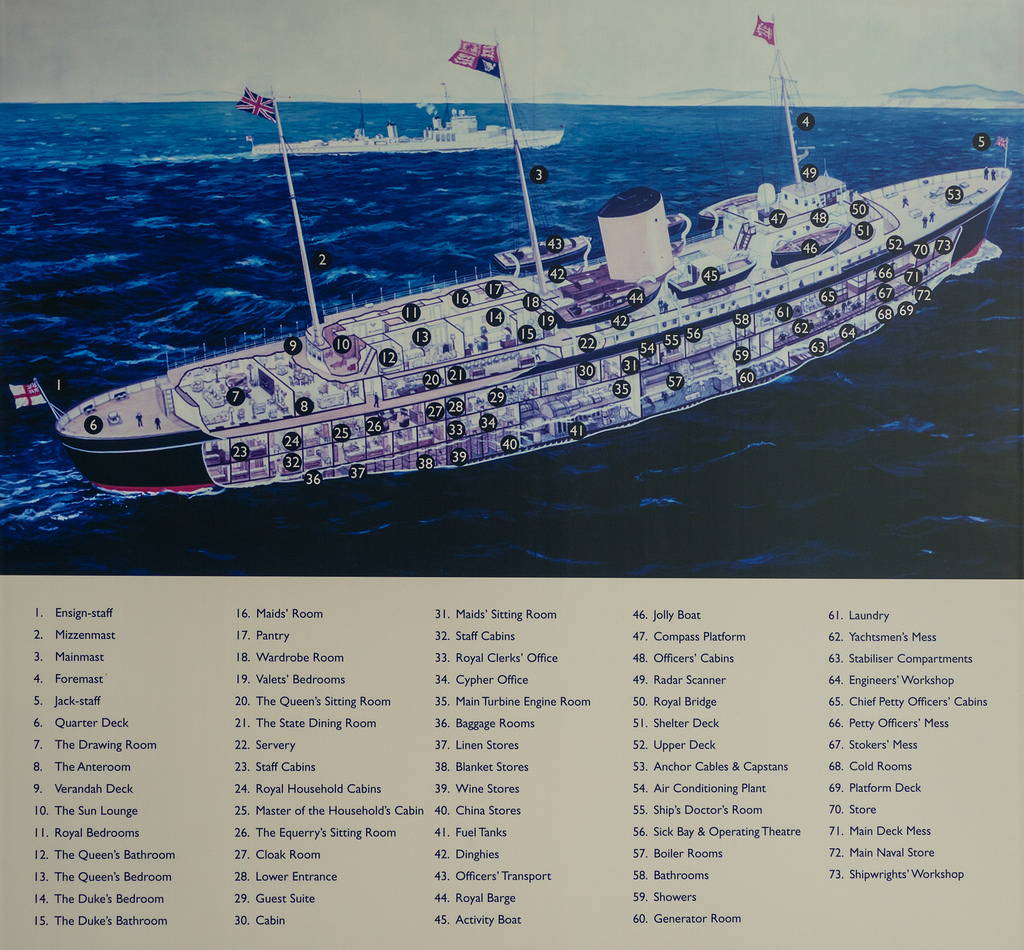 Given that Britannia was first envisioned less than a decade after the end of World War II, the timing had an impact on the designer who wanted to make it as functional as possible, and thus, the idea was to make some space that could be converted to a seafaring hospital during wartime, should need be. They even left enough space for a helicopter to land on the main veranda. In addition to that, the laundry was made much larger than it would be for a standard naval vessel with the aim of accommodating potential patients in the future. Its potential as a seafaring hospital was never fully used, but they did send it on a rescue mission to help evacuate European nationals from South Yemen in 1986.

The Britannia was home to a lot of history 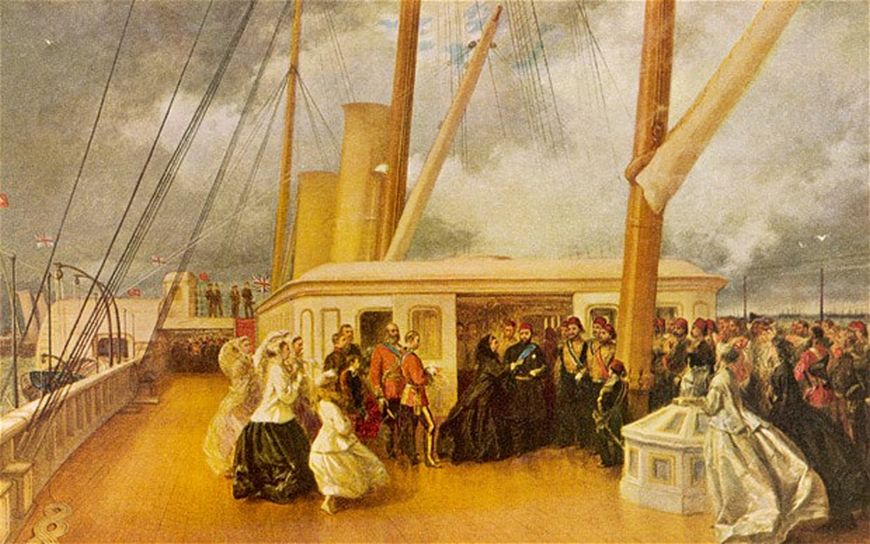 Did you know that the gold and white binnacle on the veranda deck was, in fact, originally part of the HMY Royal George, a royal yacht that served Queen Victoria? And that’s not all! Some of the Queen’s bed linens were also originally made for Queen Victoria’s bed. And its steering wheel originally belonged to the racing yacht HMY Britannia, built in 1893 for King Edward VII.

They redesigned the ship to make it less luxurious

Yes, you read it right – at some point, the Queen and Prince Philip realized that the original interior design plans by McInnes Gardner & Partners were too lavish, considering that the country was still recovering from World War II, so they decided to redesign it and they trusted this task to Sir Hugh Casson. And they kept it low-key during the 44 years of the ship’s service, as it received very minimal updates during that time.

Of course, even “low-key” in the world of a royal family means quite opulent, right? So we should also mention that the ship has the State Dining Room which can host as many as 56 guests, there are separate bedrooms and sitting rooms for both Her Majesty and the Duke of Edinburgh, as well as a formal staircase for the Queen to greet her guests. Finally, the phone system was specially designed so as to match the unique configurations of Buckingham Palace’s telephones.

At the beginning, the ship was also home to the Queen’s Rolls-Royce Phantom V. However, the garage compartment was slightly too small for it, so eventually, they turned the garage into a storage area for beer, and the Queen started using cars provided for her at port. 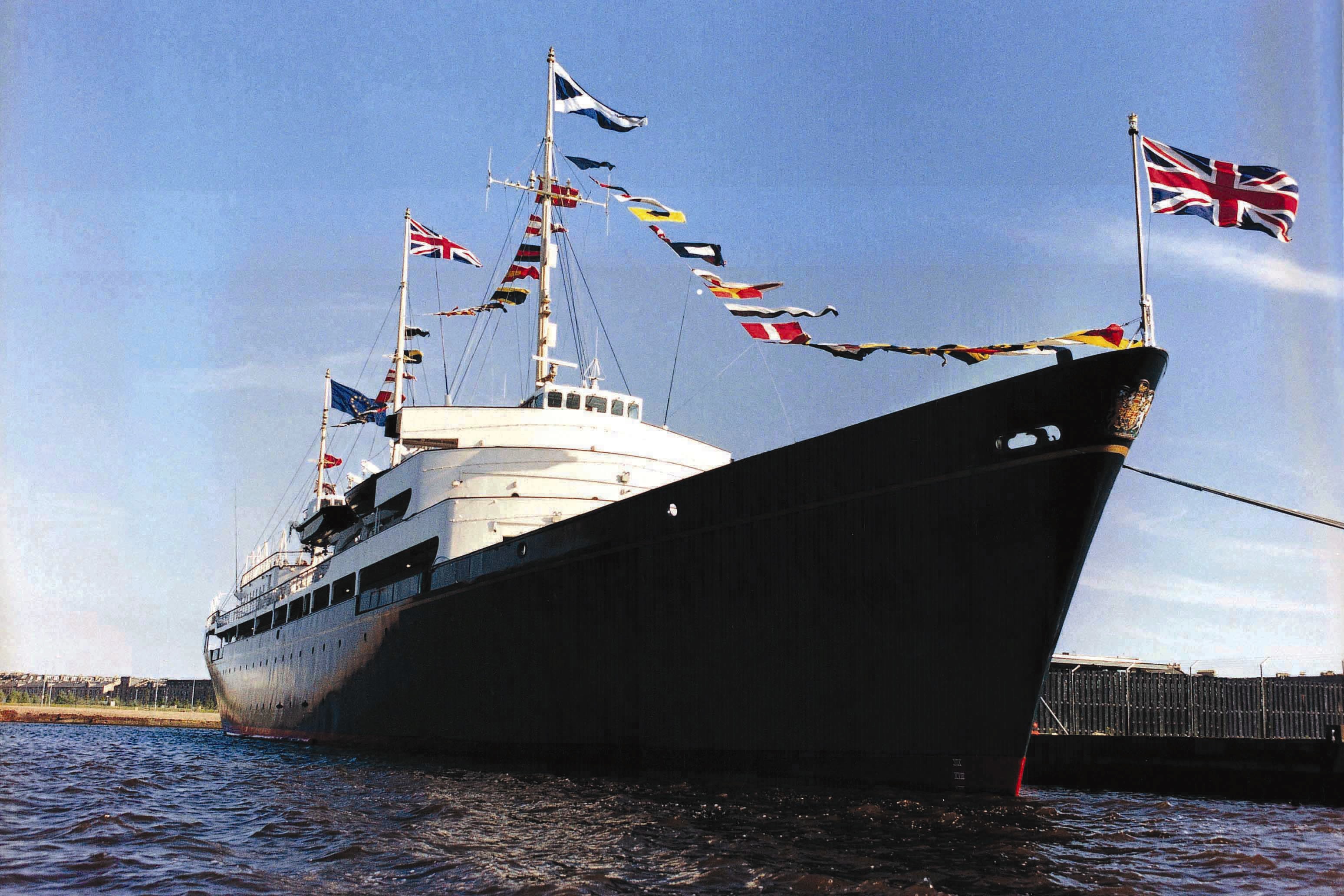 Like on most ships, you would expect the steering wheel on the Britannia, too, to sit on the bridge, where the crew can overlook the front of the boat. Interestingly enough, that was not the case here. The steering wheel was on the deck below in the wheelhouse, instead. Thus, whoever was behind it could not see where they were going, so they had to use voice pipes from the bridge so as to get navigational orders.

And this was not the only unusual thing for the crew on the royal yacht. For instance, the commanding officer was always a flag officer, too, most commonly a Rear Admiral. Also, the crew members were not allowed to shout orders to each other, but they had to use hand gestures instead so as to keep it quiet. They all slept in hammocks, which made the Britannia the last ship in the royal navy to maintain such a practice. 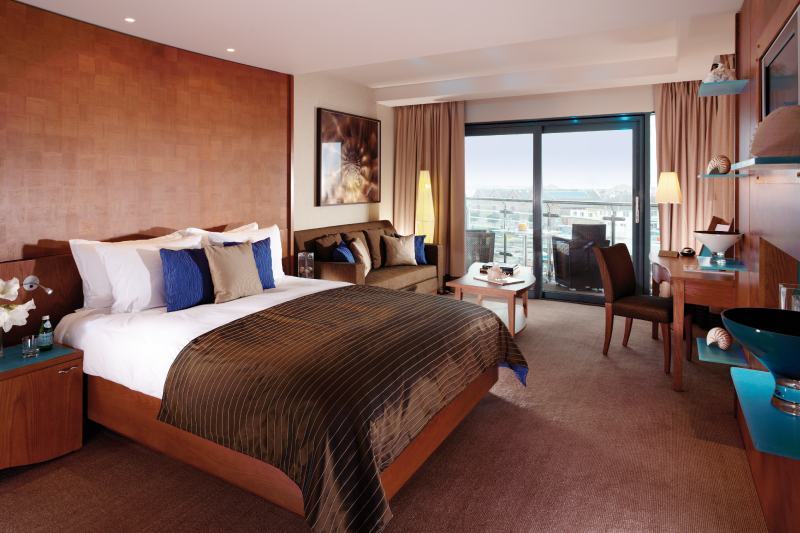 What we didn’t mention is that the royal yacht also had a luxurious honeymoon suite, which was the only room to have a double bed. So, during its service, four royal couples celebrated their honeymoons there. This tradition started in 1960 when Princess Margaret and Anthony Armstrong-Jones spent their Caribbean honeymoon on the Britannia. The next were Princess Anne and Captain Mark Phillips in 1973. However, they didn’t enjoy their honeymoon on the royal yacht that much given that storms and 20-foot waves left the couple stricken with seasickness for the first week of their cruise. In 1981, there were Prince Charles and Princess Diana who went on their Mediterranean cruise and managed to do so far away from the eyes of the press so back then, some even called the yacht the “ghost ship.” Finally, the last royal honeymoon aboard the Britannia was in 1986 when Prince Andrew and Sarah Ferguson, Duchess of York traveled around the Azores.

The ship was a royal family vacation spot 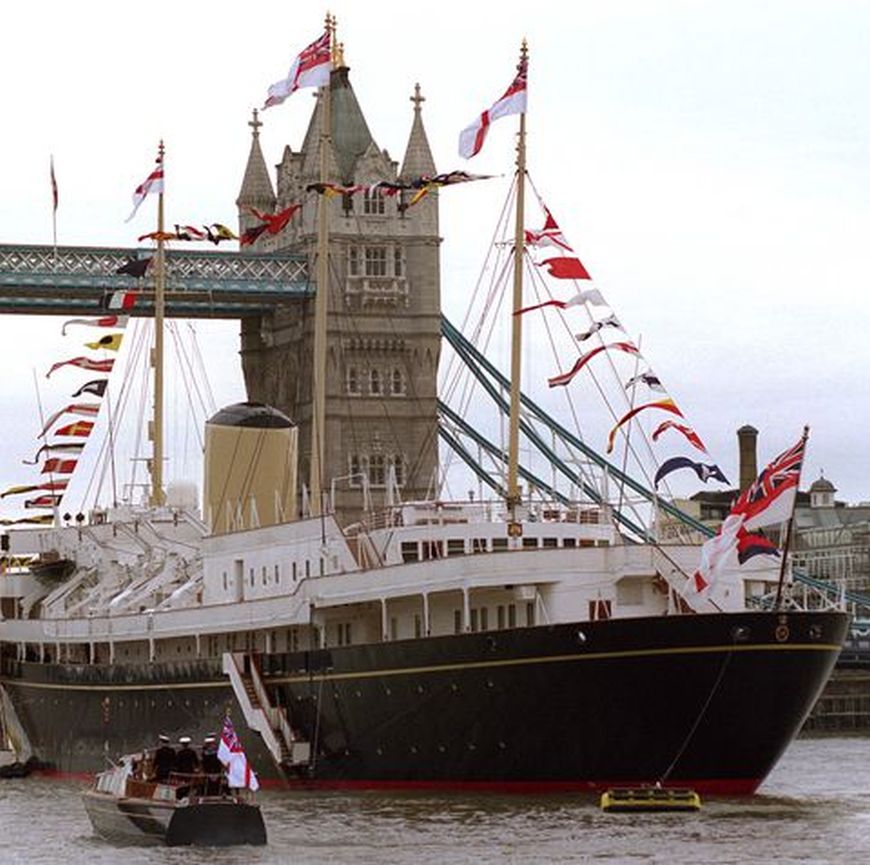 The Britannia also served as a family vacation spot, especially during summer when they would go for Western Isles tour, i.e., cruising around the western isles of Scotland. They would use the trip to spend some quality time together, playing games and having barbecues on the islands. They would even convert the stairway off the veranda into a waterslide for the younger members to have fun. The trip would also include stopping by the Castle of May and Balmoral.

The Queen wept when the ship was decommissioned in 1997 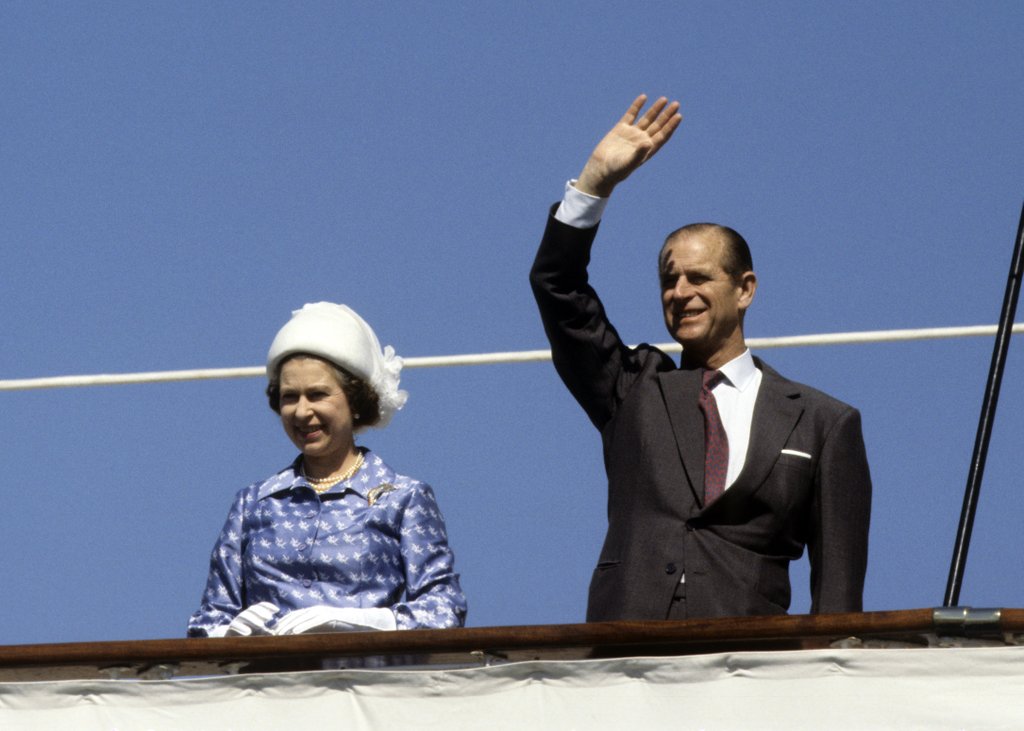 There were so many beautiful memories around the Britannia, which made the whole royal family quite sad when the ship as decommissioned, and the Queen seemed to have taken it the hardest. Ever since the Queen officially took her leave of the HYM Britannia in 1997, the ship has been in the port of Leith in Scotland where it serves as a floating museum. Since Her Majesty officially disembarked for the last time at 3:01, they stopped all the clocks on the ship at that time and they remain stopped at 3:01 to this day.

Zara Phillips chose the Britannia for her reception before the wedding 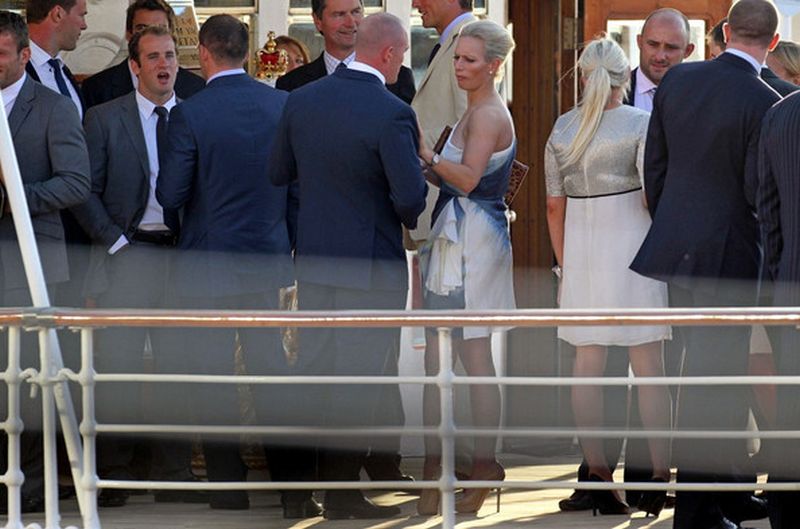 Even though the ship was decommissioned in 1997 and it is no longer the royal family private vessel, their connection to the yacht still hasn’t end completely. So, when the Queen’s oldest granddaughter Zara Phillips wanted to make a reception the night before her wedding in 2011, she decided to contract the ship for this occasion. The Queen herself was not there (in fact, she never stepped back on the Britannia since 1997). Nonetheless, Zara and Mike Tindall celebrated their upcoming marriage on board, together with her mother and her cousins Prince Harry, Prince William and Duchess Kate, Princess Eugenie, and Princess Beatrice.